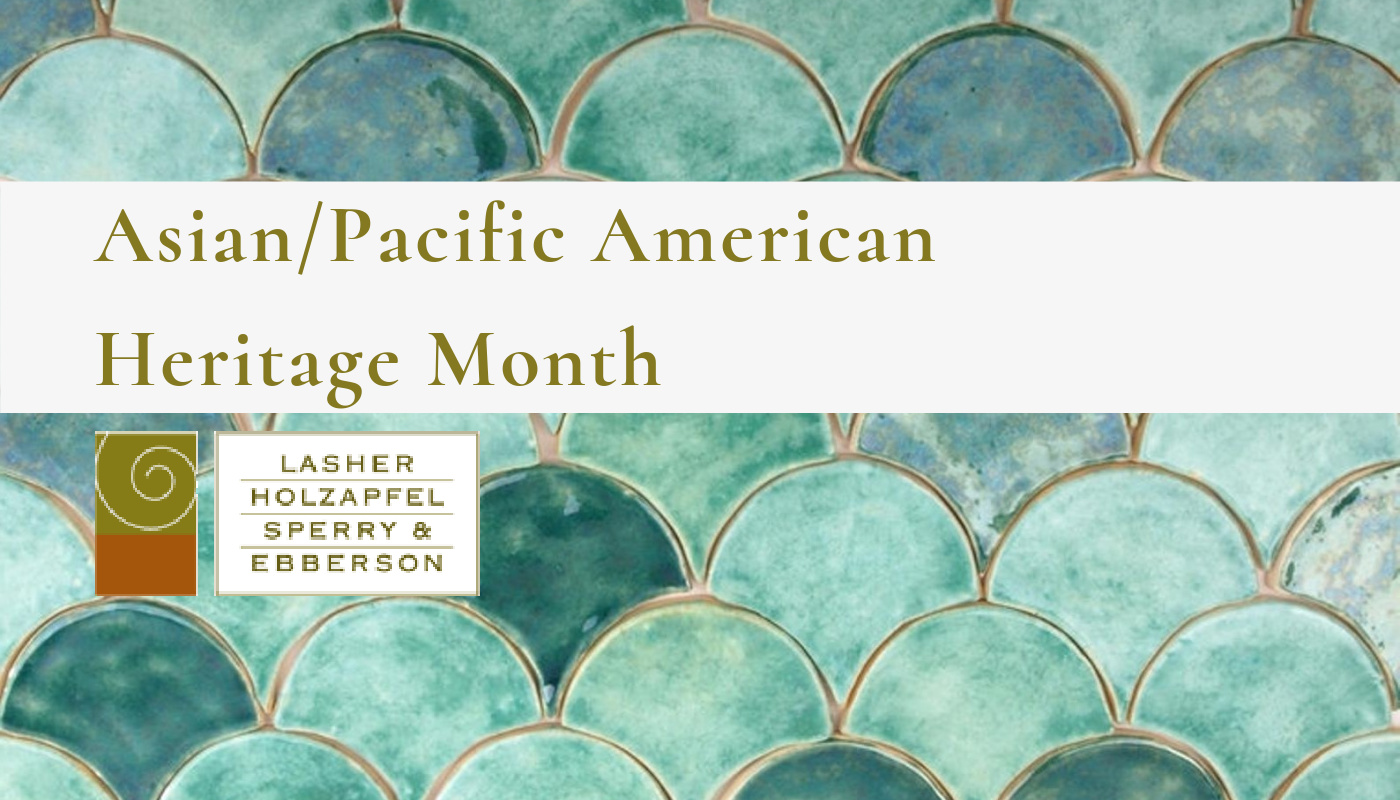 Posted on May 10, 2021 by Lasher Holzapfel Sperry & Ebberson

In recognition of the countless contributions of our Asian and Pacific Islander Americans, we will be celebrating the rich tapestry of our APA/API peers with educational information, open discussion, and suggestions for showing support for our APA/API communities. In 1978, Congress passed a joint Congressional Resolution to celebrate Asian American Heritage Week during the first 10 days of May. This date was chosen because two important anniversaries fall during this time: the arrival of the first Japanese immigrants in the United States on May 7, 1843, and the completion of the transcontinental railroad by many Chinese laborers on May 10, 1869. In 1990, President George H. W. Bush and Congress voted to expand the celebration, and since 1992, May has been designated as API Heritage Month.  As reflected in the rise of Asian Hate crimes in 2020 and 2021, we still have a long way to go.  We invite you to join us in highlighting the achievements of, and expressing gratitude for, our Asian and Pacific Islander American friends, peers and colleagues.

Looking for ways to support APA/API both locally?  Check out the following for places to Donate, Shop & Visit (courtesy, The Seattle Times):

AAPI Women Lead
AAPI Women Lead and the #ImReady Movement aims to strengthen the progressive political and social platforms of Asian and Pacific Islander communities in the US through the leadership of self-identified AAPI women and girls.

Seattle Chinatown-International District Preservation and Development Authority
Formed in 1975, this community development organization helps provide affordable housing and small-business assistance in the Chinatown-International District. In addition to donating, you can also read some inspiring stories from recipients of SCIDpda’s small-business relief fund—like Jason and Carol Xie from Purple Dot Cafe—here.

See also: The Seattle Repertory Theatre has an extensive list of local and national places to donate and get involved, as well as petitions to sign and reading recommendations.

Atulea
This “modern tea room” is owned by married couple Kathy Wang and Vince Shi and specializes in “cheese tea,” a Taiwanese food trend consisting of iced tea with a cheesecake-like layer of foamy cream cheese floating on top. The shop also carries other beverages, like matcha and coffee, and treats like mochi doughnuts.
Capitol Hill

Hood Famous Bakery
The beloved Ballard bakeshop is famous for its Filipino-inspired specialties such as ube cheesecake. In addition to co-owner Chera Amlag’s well-known sweets, they also carry breads and pastries, as well as savory offerings from Amlag’s co-owner and husband Geo Quibuyen, like Filipino-inflected quiches with fillings like longanisa sausage and bittermelon. The bar features a coffee program by day and a drink menu with cocktails in familiar flavors like tamarind, guava, and ube by night.
Chinatown-International District

Kamonegi
This pint-sized Japanese spot from chef Mutsuko Soma, who was named one of Food and Wine‘s best new chefs for 2019, has racked up national accolades for its tempura and handmade soba noodles, which Soma painstakingly makes from scratch using Washington buckwheat. (The entire process takes her two to three hours.)
Fremont

Maneki
Maneki is pure comfort food, serving izakaya and very reasonably priced sushi. In its 100-plus years of existence, Maneki has only had one major interruption to business (other than COVID): when it shut down because the US government sent Japanese Americans to internment camps during World War II. After the war, in 1946, internees returned to the city and reclaimed their belongings from a space in the NP Hotel that has since been the restaurant’s home.
Chinatown-International District

Ping’s Dumpling House
Our friend Erika, who is a legit China scholar and has lived over there for longish stretches and also is a great cook of Chinese food herself, says, “I am a big fan of a small place in the ID called Ping’s. The proprietress is from a city close to Beijing, and they serve the best northern fare I’ve found here: dumplings, fried street snacks, zhou (Chinese porridge), and other assorted dishes. Much as I would love to dine with you in China someday, Ping’s is a good fix for now.”
Chinatown-International District

Tai Tung
Recommended by Tom Douglas himself, this family-run gem is one of the oldest Chinese restaurants in the ID, having been around since 1935. Try the dependable and decadent hum baos (sweet bread stuffed dumpling), which never fail in their flavor. Also of note: Bruce Lee apparently worked here when he lived in Seattle many years ago. This place is consistent, friendly, historic and cheap.
Chinatown-International District

Toyoda Sushi
Toyoda is the hidden gem of Lake City; its existence is a well-kept secret, spread mostly by word of mouth. The fish is unbelievably fresh and creamy: For whole seconds, it is impossible to focus on anything except this heavenly taste, as if you have just seen the Holy Virgin outlined on a piece of pickled ginger. You will feel capable of such a vision.
Lake City

Stop Asian Hate Memorial
In memory of the women of Asian descent who were killed in Atlanta—and all AAPI communities experiencing hate and grieving from loss—the Seattle Asian Art Museum invites visitors to take a moment of silence on their front steps.
Seattle Asian Art Musem, Capitol Hill (March 27-28)

Wing Luke Museum of the Asian Pacific American Experience
The Chinatown-ID Museum, which was founded to honor the late significant Asian American leader in Seattle by the same name, returned for in-person visits earlier this month! Reserve tickets Friday-Sunday from 10 am-5 pm to see exhibits like Where Beauty Lies, which explores the relationship between beauty standards, personal presentation, and representation among Asian Americans, and pick up (or preorder) goods from local makers at their marketplace, like these anti-racist enamel food pins or this book and pin set with the essay anthology Asian American Feminisms & Women of Color Politics, Grace Lee Bogg’s Living for Change, and some “intersectional” pins by Word for Word Factory.

Hmong Flower Farmers
The flower stalls at Pike Place wouldn’t be famous without the Hmong farmers who sell their freshly cut bouquets every day. Check out their flower directory to pick out specific vendors, or just stop by for some socially distanced spur-of-the-moment shopping.

Kinokuniya Bookstore
With a newsstand, adorable stationery options, and a staggering manga collection, Kinokuniya is a great place to pass the time.
Chinatown – International District

See also: This directory of AAPI-owned businesses in Seattle.