November 16 is The Day for Tolerance

November 16 is The Day for Tolerance

November 16 is The Day for Tolerance, which came into being after the United Nations declared 1995 to be a Year for Tolerance. That year, UNESCO created the Declaration of Principles on Tolerance as a way to define and provide awareness of tolerance for any and all governing and participating bodies. That day in 1995 was November 16. Now, every year on the anniversary of that Declaration, we celebrate the International Day for Tolerance to help spread tolerance and raise awareness of any intolerance that may still be prevalent in the world today. 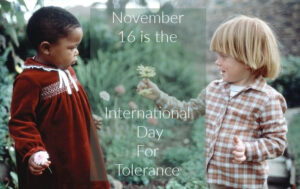 From the UN ‘Academic Impact’ written by then Secretary-General Ban Ki-moon (in 2015):

“People are more connected – but this does not mean there is more understanding. Societies are ever more diverse – but intolerance is growing in many places. Tolerance is much more than passively accepting the other. It brings obligations to act, and must be taught, nurtured and defended. Tolerance requires investment by States in people, and in the fulfillment of their potential through education, inclusion and opportunities. This means building societies founded on respect for human rights, where fear, distrust and marginalization are supplanted by pluralism, participation and respect for differences. On the International Day of Tolerance, let us recognize the mounting threat posed by those who strive to divide and let us pledge to forge a path defined by dialogue, social cohesion and mutual understanding.” (Former UN Secretary-General Ban Ki-moon)

To help, here are 10 things you can do to celebrate tolerance: https://www.itacec.org/USIP/document/UNESCO_10_ideas.pdf